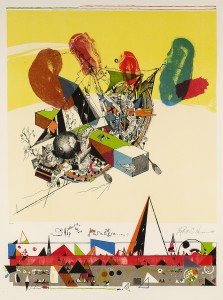 The Sunne Savage Gallery and The Heckscher Museum of Art are pleased to present Robert S. Neuman’s Ship to Paradise.  The exhibition focuses on the artist’s surrealist illustrations for an edition of Sebastian Brandt’s The Shyp of Fooles, a 15th century allegory on the foibles and folly of man.  In speaking about the exhibition, Lisa Chalif, Museum Curator, said “It is a privilege for The Heckscher Museum to present this exhibition of Neuman’s Ship to Paradise works which include etchings, lithographs, mixed-media drawings, and printing plates. And, we are fortunate to be able to include the two-volume Shyp of Fooles/Ship to Paradise produced by a direct descendent of the Museum’s founder, August Heckscher.”

Robert S. Neuman’s Ship to Paradise is the artist’s personal exploration of a theme that dates back to the Middle Ages.  Reflecting on the modern day world around him and informed by knowledge of seafaring and shipbuilding intrinsic to life in Maine, Neuman’s fantastical compositions are a metaphor for the human condition and man’s quest for a better life.  Neuman’s exploration of the theme was realized in print as a portfolio of etchings commissioned by August Heckscher, grandson of the Museum’s founder and a fellow summer resident of Mount Desert Island, to accompany a fine facsimile edition of humanist Sebastian Brandt’s best-selling medieval satire Shyp of Fooles, which outlines in 112 chapters the vices and worldly conceits of man that prevent him from reaching godly salvation in paradise.

Robert S. Neuman’s Ship to Paradise will travel to the Bates College Museum of Art in Lewiston, Maine where it will be on view from January 18 through March 22, 2013.  A color catalogue with essays by Philip Heckscher, Carl Little, and John C. Olin accompanies the exhibition.