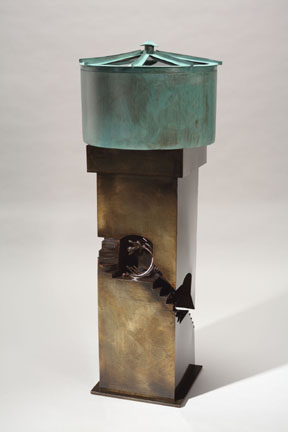 Inside Outside Exhbition: Mayer Gallery

Inside Outside is an exhibition of Gillian Christys’ newest work consisting of sculptural wall pieces inside the Mayer Gallery as well as outside, among the TCVA grounds.  This body of artworks is based on the familiar objects that one may view on a daily basis.  Christy often discovers these elements found in existing architecture or industry.  Christy states, “ These object’s shapes intrigue me enough to recreate them, skewing their perceived form, function and size. It also strikes me as humorous that these objects could potentially retain personality traits!  Clearly, I create an imaginative world but often the underlying themes illustrated within the piece are serious in content.”

Christy is currently underway creating public artworks for Waterplace Luxury Residences Providence, RI and the Water Street Bridge Fitchburg, MA. Inside Outside will be on exhibit at Fitchburg State College, Fitchburg, MA from October to December 2009.