Savage exhibits “William Thon: Paintings and Works on Paper” at Redfield Gallery, ME.

“William Thon: Painting and Works on Paper” will be on view at Redfield Gallery, 125 Main Street, Northeast Harbor, Maine, August 27th to September 19th, 2009. Contact Sunne Savage with inquires at the Redfield Gallery (207) 276-3609.

Inspired by the waters, cliffs and boats on the Maine coast, William Thon worked with variegated textures to achieve his vision.  In “Shag Island”, 1961, (shown above) Thon uses his palette knife to create texture and plains on the surface of the rocks where the cormorants perch above the frigid waters.  Thon works his palette knife to express the sharp angle of the steep cliffs, and with the sweeping strokes, he creates turbulent waves giving a dramatic mood.  The emotional impact that Thon achieves with paint is forceful. His trademark watercolor and resist technique is used on works on paper where he interprets, boats, the fog and seagulls in flight. “The Irish Fishermen” a watercolor shown below is an example of this technique. 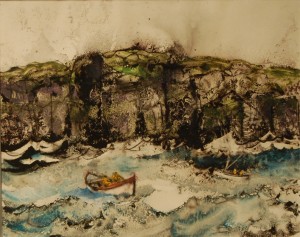 William Thon lived in Port Clyde with his wife, Helen. He was discovered by the owner of the Midtown Gallery, Allan Gurskin. Midtown Gallery continued to represent Thon for forty years. Helen and William Thon announced in 2001 that they would bequest their estate to the Portland Museum of Art. The funds are used to support the juried biennial art exhibit by Maine artists held at the Portland Museum of Art.